The following post details the Global Goulets’ journey from April 7 – 8:

Day 7 – We thought we’d be on the road towards Loredo by late morning, but of course we didn’t leave Austin until 4pm. So, we drove through Southern Texas and saw the scorching sun slowly scoot across the sky and out of sight, making way for a bold moon. Just then it occurred to us this would be our last American sunset for a long, long time.  At last, we made it to Loredo, the final town in Texas before Mexican Territory, where English and Spanish intertwined. It was a bizarre town indeed, an odd amalgamation of the Las Vegas strip and the chain restaurant roads of New Jersey. At any given time, you can see three separate McDonald’s and four predatory loan businesses. With nostalgia for America setting in and anticipation of Mexico building up, we made sure to have a healthy Taco Bell quesaritos dinner as our final meal. After dinner we turned into Casa Blanca International State Park to set up camp and pour out all of our pre-border emotions on camera. Talking about our feelings in front of the camera made us realize just how nervous and ill prepared we all felt. We nervously laughed to an uproar. What in the hell were we about to get ourselves into?!

As weird as things are in Austin, they were only about to get weirder as we turned the compass south

Day 8 – We woke up really early with plans to cross the border relatively early, as Monterrey, our first stop into Mexico, was a couple hundred miles into the country and the last thing we wanted was to be lost in Northern Mexico after the sun goes down. In fact, our initial plan had always been to fly into Guatemala and buy a car there to avoid cartel-riddled Northern Mexico altogether, an idea squashed as unnecessary and illogical by other Pan-American travelers on an online forum. However, a bevy of dilemmas prevented us from leaving on time: we’d forgotten to notify our banks we’d be traveling into fifteen countries, which is a process and a half (“that next one is ‘Chile’… like the food); right before attempting to cross the border we looked up required documents and noticed having multiple copies of all required documents on hand was highly recommended, so we turned around and looked for a copy center; while retrieving all our docs to go inside Office Depot, we accidentally locked the keys in the car and had to wait 45 minutes for AAA to come to the rescue (speaking of which, what the hell do we do if this ever happens once we’re no longer in the U.S.?); oh, and most importantly, we needed to exchange dollars into pesos.

The actual border crossing was shockingly simple. Having said that, it was quite horrifying being in the one place everyone tells you to avoid, the Mexican side of the US-Mexico border. Just after a scare in which Eric had convinced himself he’d left his International Driver’s Permit in the copy machine at Office Depot (it was in the glove compartment after all), we decided to finally check our tire pressure. Turns out all four of them were severely underinflated! Best of all, the crappy basketball pump we bought didn’t stand a chance in even adding an ounce of air to the monstrous SUV-sized tires. So we stood in Mexico’s parking lot, in plain sight of America across the river on the other side, futilely stomping on a foot pump to no effect. Yea, whoops…

About four incidentless easy hours of driving later, we arrived in Monterrey, an economic powerhouse and producer of 50% of the nation’s cerveza. The city had mostly stayed out of the drug wars that ravaged other parts of the country until about 2 years ago, when a couple mass homicides riled the city. We pulled up to our hotel, checked in with a man who spoke zero English (a trend we’d have to start getting used to), and began unloading our car of our essential belongings, at least initially. After a few minutes, a nice school security guard came up to us and started pointing to some shattered glass right next to our car. Basically, he was cuing us in to something we should have already deduced, but of course thought nothing of – this was broken glass from another car’s window… obviously. Ok, so really we needed to take EVERYTHING from the car into the hotel room as long as it was something we wanted to keep (which was everything, especially our 5lb tubs of peanut butter). A solid hour of frantic and panicked unpacking led to a hotel room completely inundated with our crap, strewn everywhere. At that point, we were so overwhelmed with paranoia, we were ready to hide inside the hotel room for the night and ditch Monterrey in the morning. But c’mon, that totally defeats the Goulet spirit.

The shattered glass on the ground literally next to our car window could mean any number of things! 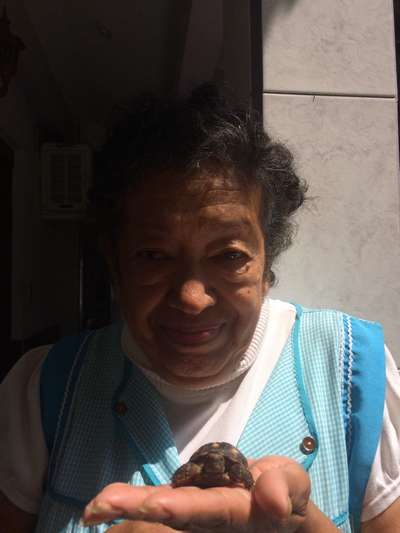 Instead, we found a seemingly safe parking garage to hide our still unnamed steed and went for a stroll around the city’s awesome promenade, Paseo Santa Lucia, which sported a beastly Mexican flag in front of a mammoth museum, surrounded in all directions by the cascading silhouette of towering mountains. Maybe Monterrey isn’t so bad after all. 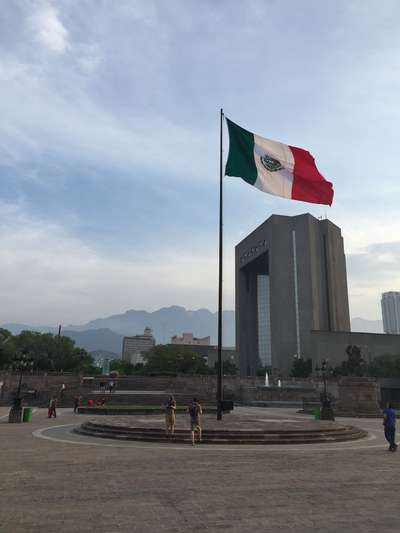 Look how tiny those Alexes and Brians look under that big flag!

Cheers to these 40 cent beers! And making it this far into Mexico with our lives!

We had a couple local coldies and set a plan for dinner. We zeroed in on El Rey de Cabrito, famous for its signature cabritos (baby goats), the local dish of the region. When we got there, we hesitated before ordering the monstrous medio cabrito (half goat). The meat came in minutes, sizzling atop a bed ofcebollas, enough to feed a small Central American nation. We wrapped our cabritos in tortillas, paired it with frijoles y ensalada, and topped it all off with some fiercely fiery hot sauce. What made the experience so unique was the addition of the baby goat’s skull- brains, tongue and all. The only things removed were the poor guy’s eyes, which were plucked out by the waiter in front of us. Of course, we tried the brains (on camera), which were as distasteful as you could imagine. Cheers to Brian for giving the tongue a try. When it was all said and done our awesome waiter motioned us to the kitchen to get some shots of the cutting of the cabritos in action. Much to our surprise, it wasn’t the chefs who did the cutting for the camera, but our very own Alex! A machete in hand and the tape rolling, Alex gave it a hack. “Más fuerte!” we all cried. Alex laughed and hacked harder. And again! And again! At last, the cabrito’s legs were successfully dismembered from its torso. Great work, Alex! By the time we got back to the hotel, the meat sweats were in full effect, so we struggled through a quick recap of the day on camera and conked out. Our first día de Mexico was complete.

They say if you eat a goat’s brains, you turn into a goat!