The following post details the Global Goulets’ journey from April 9 – 10:

Day 9 ­– We woke up having no clue where our next destination would be. We thought San Miguel de Allende, but that was 8 hours away and we wanted to avoid the prospect of driving in the dark at all costs. So, after searching the town for a café to caffeinate ourselves in advance of laboriously re-packing the car, we settled down with some wifi and scanned alternatives. “Hmmm, this Zacatecas place seems pretty sweet,” Alex mentioned while perusing our Lonely Planet guidebook. “Works for us,” Brian and Eric shrugged. Zapatecas it is! I mean, Zatapecas. No, it’s Zapacecas. No, no, Zacatecas! Alas, after enjoying some local cuisine from a kindly husband and wife duo (the husband, it turns out through conversation, used to be a notable luchador – see our upcoming post on Lucha Libre), we navigated ourselves onto the highway, through the glorious outskirts of Monterrey, and sailed south into the desert towards our next rally destination. During this car ride we found the time to discuss potential nombres for our Xterra, and settled on Santa Maria. Que padre! 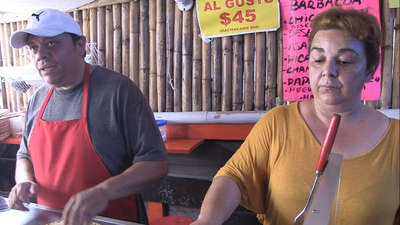 We arrived in Zacatecas in the heat of bustling traffic at evening’s onset. We quickly learned that there was an epic 10-day Easter festivity that of course was ending on the night of our arrival to town. We suspected a concert was ending and that was the cause of such car congestion on the calles, but eventually it became clear this was an every evening occurrence. Alex and Eric checked into the hostel, got the keys for our private room with a door leading directly out onto the cobblestone streets, checked out the award winning rooftop view of La Catedral and waited for Brian to come back around the block so we could unload the car. Brian sat in traffic. He sat in more traffic. He frustratedly maneuvered up and down one-way streets, circumnavigating the town, and sat in more traffic. Finally, no less than an hour later did he return with the car, ready to unload all our essentials (which is everything) into the apartment. We walked around the tourist-less town and found a modest restaurant crowded with locals. To us, this was an indication of excellence, so we walked in, ordered unas cervezas, and decompressed. After dinner, we strolled around el centro, smiled at the sight of young lovers in all directions (we like to say “lovers” with an exaggerated Mexican accent – think Jack Black in Nacho Libre) and eventually sauntered off to bed. 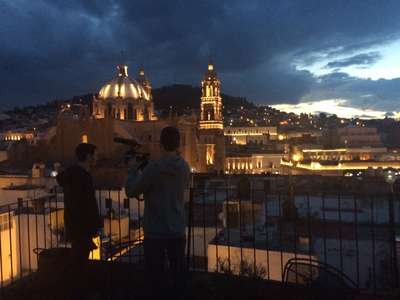 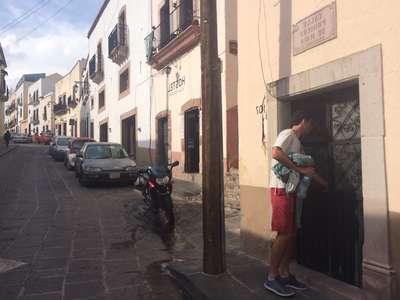 Not too shabby a location for a couple nights in Zacatecas

Day 10 – We woke up early Friday morning and, tired from sitting in the car so much, planned to seize Zacatecas on our own two feet… or six feet. We parked the car for the day on the street, next to a car with a swastika (cue freaked out video by the Jews, Eric and Brian), and began the trek up to Mina el Eden, the silver mine around which the town of Zacatecas was built. Up some steep steps we struggled until a spellbinding scene took shape atop a side street’s slope. We peered down on the city, then peered up at the mine we would soon explore. We bought tickets and asked, “Hay un tour en inglés?” (Is there a tour in English?) Luckily, a bashful, yet amiable bilingual guide stammered out of the ticket booth and began to chat us up in our native tongue, the first such person to do so since we’d entered Mexico. “Sweet glasses,” Brian commented to the young tour guide. “They’re very Brooklyn-esque.” “I’m not sure whether that’s a compliment or not!” he replied. We weren’t sure either. 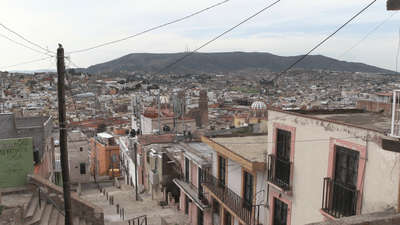 If you think that’s a sweet view, just wait till we get to the top of La Bufa! 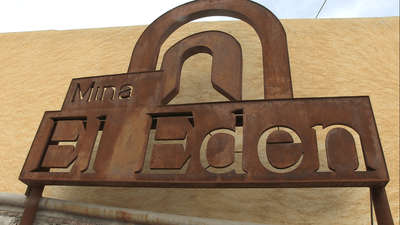 They called it El Eden because it contained the fruit of a sprouting city – silver!

The tour guide knew his stuff, but the inside of the mine was a bit uninspiring, with some museumy sets and stories clearly intended to spook los niños. At the very least, we learned that, for centuries, life in Zacatecas’ silver mine was pretty much akin to slavery. When the tour ended we handed him a goulet business card and told him, “Follow us on Instagram!” 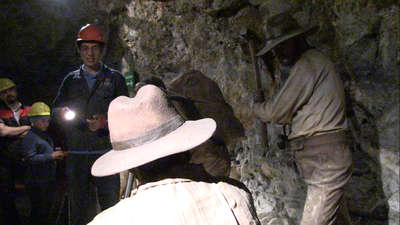 Our tour may have been aimed at little kids, but… wait, actually, we’re basically little kids! 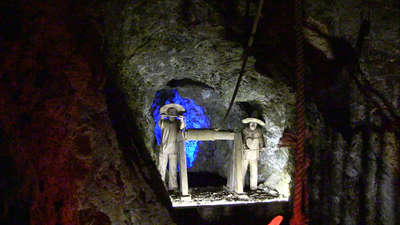 We walked back down the hill to el centro and began asking folks for walking directions to Cerra de la Bufa, the awkwardly shaped mountain that proudly stood above town (it literally translates to ‘funny looking thing’). Without fail, each person kindly directed us towards el telefonico (the gondola) that stretched overhead from La Mina to La Bufa. Perhaps due to our weak Spanish, but more likely because nobody in their right minds would opt to walk up La Bufa, each local with whom we spoke replied in a mix of shock and confusion at our preference for walking directions. Eventually, a couple of young chicosin some sort of goofy colonial dress, working for a bizarre colonial themed restaurant or tour group, helped us find the foothills of the path up to Cerra de la Bufa. 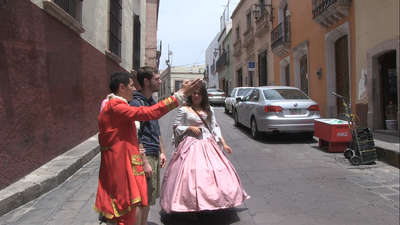 “You basically walk up this hill and just keep going up…” 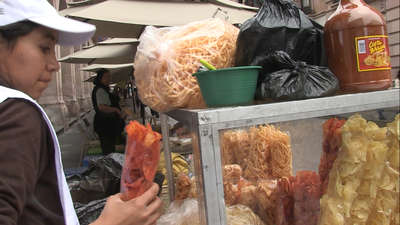 We walked, and walked, and walked some more. We took a break. Then we walked and walked and walked until finally the zenith was in sight. We rejoiced, took in a spectacular panoramic view of town opposite La Mina and then discovered there was a twin peak a bit of a hike in the distance where there seemed to be no other people and only a rough dirt path that looked less travelled. Perfecto! We hiked over, Eric’s caffeine rush wore off and he got tired, then we followed a familiar herb smell into a cave, walked out of said cave and finally found a route to the peak of la bufa seconda. After a zipline ride left Brian giddy, we’d decided it was time to go back and nap up for the night. It was at dinner when we realized, based on very rough calculations, that we had very little chance to stretch our budget all the way to the End of the World. Stay tuned… 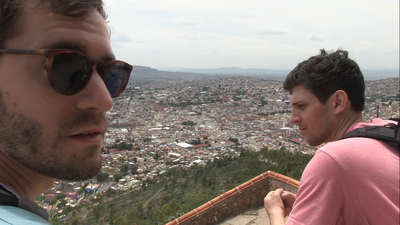 The hike was worth it! 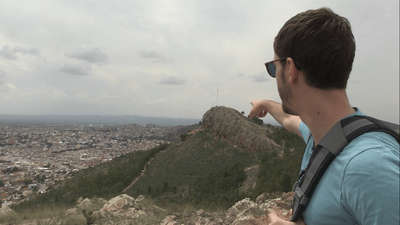 Standing on La Bufa’s sister, Brian points to where all the action’s at 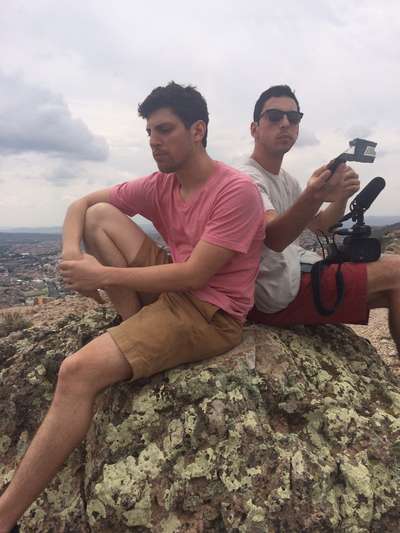 That was hard, we need some thunder to go with that lightning of a hike! 😉