“You know you are in extreme cold, when you spit and your saliva turns solid before it hits the ground.”

These are words from a well known polar scientist. After having spent two major Expeditions in what is considered extreme cold, I have learned some lessons to share. The most important one, surviving in extremely low temperatures is basically a state of mind…and to some degree genetics and acclimatization.

Let me first tell you about the two expeditions I have done in extremely low temperatures.

The first one I did back in 2004-05.  I spent a whole freezing winter skiing down the Kolyma River in Siberia, average temperature around -48 degrees Celsius. At times as low as -58. (My friend Egor Petrovich Makarov disagrees on that specific temperature, because he says it isn´t that cold along the Kolyma, at the most -52. Now, after this last experience, I know it was that low!) We spent many nights, even months, without any heating in the tent, Johan Ivarsson and I. After having just returned from this latest Frozen Frontier journey, I don´t know how we survived the Kolyma Expedition. But we did. Even though we were sweaty and pulling 330 pounds of weight each.  Egor doesn’t understand how we survived either. That is how cold, real cold is. One thinks one is going to die. But we didn’t. Because we had the right state of mind. 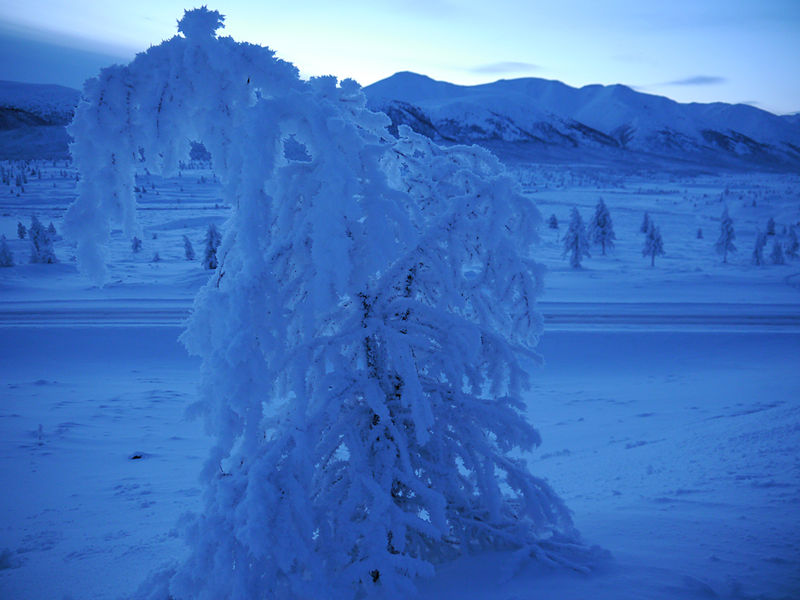 The second expedition, just finished, the Frozen Frontier, was 50 days traveling 650 kms from Oymyakon to Arkah by reindeer and sleds. Temperatures were generally lower, averaging around -48 degrees Celsius, but with more days of real low temperatures. We did very little physical hard work, but instead we sat more or less motionless on the back of a sled pulled by fast running reindeer. Since I have just returned from this one, I remember this pain more. Because that is what you feel after 2-5 hours each day at the back of a sled in extreme figures. Pain, especially your feet. On this journey we had wood stoves, but initially the one we had in one tent, was so bad that we had problems sleeping and relaxing until temperatures got a bit higher, meaning higher than -50. Because there is a major difference between -40 and -50 degrees Celsius. And even bigger between -50 and -60 degrees Celsius.

On one of the first days I walked out of the tent with a cup of hot tea I wanted to get rid of, so I threw it up in the air and it came down tinkling in crystals. It was beautiful. And it was just after 10 in the morning, so not as cold as at 4 a.m in the morning. Siberians say this is a good measure for temperatures being around -50 degrees Celsius. One thing you do learn, is to tell the differences in cold temperatures. It is easy to know when it has gone down to close -60 for example. When inside a tent for example, like the Siberian version of today, which isn´t really adequate for these kind of temperatures, but cheap, it is hot and nice at the ceiling of the tent, but on the ground level, even if one has put ample thickness of dry branches as a floor, everything down there is still frozen and most of the time, I spent hours every evening sitting on my mat transferring the days footage together with Yura. Fully dressed most of the time, if not,always using the down jacket as a barrier against the penetrating cold. The nights were much easier this time though, since no major physical work had been done, no bodily sweat and the wood stove drove away the worst cold after a couple of hours. On the Kolyma expedition we froze and shivered with pain the worst nights and it was impossible to sleep.

Since I had spent 3 years in the Arab world, most of it in hot deserts, I was badly prepared for this cold this time and as quickly as I got off the plane, my old frost nips on the cheekbones appeared and plagued me through the trip, but I covered up properly and with the help of especially Egor and Yura, I kept it under control. One has to take care at all times. My team members had some problems as well, especially Yura Grigorovich, who had two badly infected cheek bones from frost bite, but cured and treated it with dogs fat. His skin is still disfigured, but he picked it up on before we set off together. It looked real bad, but the dogs fat did the job. Otherwise, sure, if you live in these temperatures regularly, you have major advantages. Even the freshman in the group, Bolot, had no problems at all with frost nips or worse. But, we never spent more than 6-7 hours outside in a row, without getting indoor heat from the wood stove in the tent. In this of course, is a life saver.

Even locals die in this extreme cold. One story I heard was about an experienced herder, who in -50 just wanted to go outside the tent and get some new firewood, which is the major hard work out here and once he got outside, his tent caught fire and he hadn’t done what he should have before leaving the tent, leaving his big fur coat on the outside as a security. So he froze to death even if he was used to this cold and had only 25 kms to some kind of help. So the right choice of clothes is important!

One of the minor goals of the Expedition beforehand was to do a proper test when it came to fur versus modern polar kit. Egor had set me up with a full fur outfit from Andrushkino in the Kolyma area. I paid 2000 dollars for boots, gloves, trousers, jacket and hat all in reindeer skin. He said that one could sleep outdoors in that kit only, no matter how cold, as long as one covered oneself in snow. When I first saw it I thought it was beautiful, but looked extremely bulky. Even though I had sent over my sizes, gloves and boots seemed small, but I thought it probably had to be like that. 3500 years of knowledge was put into that kit.

My modern polar clothes came from Mountain Hardwear, TNF and Termo. The boots came from Baffin and promised to keep cold at bay even if it was -100 degrees! The difference with the down was that it was more flexible, comfortable and one didn’t have to take care of it as much as the fur. But, of course, in the sharp taiga, down is no hit, so I lost a lot of down on this trip!

At the end of the journey, I had mixed the two. The biggest problem were my feet. As it turns out Baffin Boots weren’t good enough. Too heavy in deep snow, slippery on ice and not warm enough! I also used Termos double socks, one pair only. I ended up using the reindeer boots, which still weren’t the right one´s for the taiga. It turns out two mistakes were done from the beginning. First of all, the fur kit was brought indoors, which made it stiff, therefore my trousers broke immediately and were therefore useless. Secondly, the andruskino kit was made for the tundra, which is a windy, flat, icy expansive of Arctic desert. We traveled in the taiga, with very little wind, but deep snow and dense forest. So this kit was too bulky, heavy and really, totally wrong. For example, the boots, which I did use all the time and which were better than the Baffin boots, were ankle high, but should have been knee high, the inner boot was too thin, so the Eveny gave me one of theirs, a knee high inner boot. This worked well, except on snow, because the sole was made of fur, good on the tundra, like skating in snow and on ice. the Eveny taiga herders have a sole made of moose, with the inside out.

Another issue which made the fur kit almost useless on this trip was the lack of a detail covering up the neck. Yura Stepanovich decided to try to sleep in the fur kit only one night in -40 Celsius, but suffered from the lack of this details and a belt keeping it all together. It was just the wrong kit. So I used the boots, which did the job, even if I was terribly cold at times, and than modern polar gear. The jacket was perfect, the mittens slightly cold at times, but more than good enough, I mainly used the thin polar tech gloves anyway, I just don´t freeze in my hands, the trousers just ok, at times, too cold at the knees and on the thighs and it took a lot of damage from sharp twigs of the taiga. The face mask was perfect, my old hat not that good, a big mistake, but the down hood on the jacket took care of that and I used double long johns, double long shirts from Termo and this worked well. I also had some thinner trousers on. So quite a few layers and as a whole, it did its job. One thing I was stupid enough to leave behind was a down vest. Sunglasses and ski mask were impossible to use until temperatures went above -30 Celsius. So, modern polar gear stands up to the cold, its weakness is on the boot side. Especially if there´s no physical work as such involved. 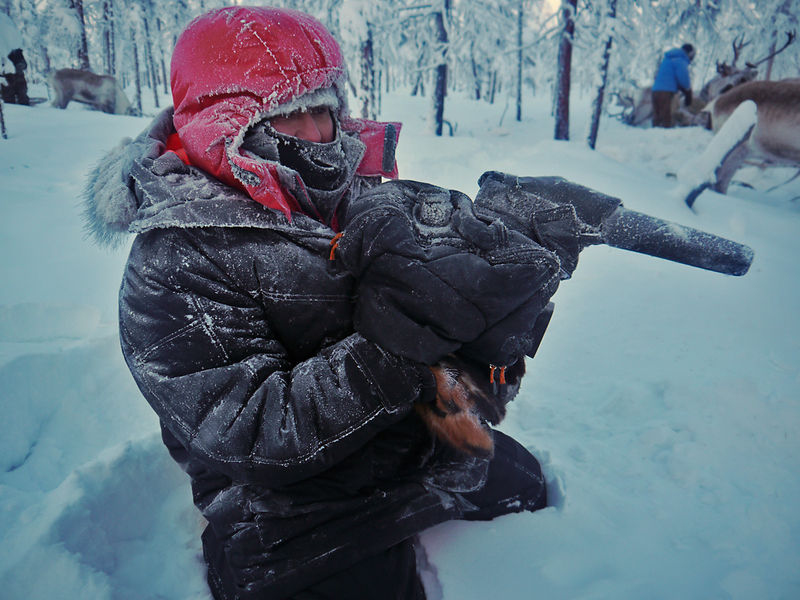 My photographer of the documentary on this trip, Yura Stepanovich, worked almost all the time without gloves or mittens. Only somebody from the region could do that and since he is half Sakha, it means he does have the genetic advantage of the Hunters reflex, which allows locals to withstand cold more than others in their hands. But as I said initially, otherwise it is all up to your mind work. And, putting on a reasonable amount of fat, makes a difference. I lost 15 kgs by eating good local food, working a bit more than normal, but most of all using the energy from the fat to keep the cold at bay. So, a non-local, needs more fat!

Remember, even if you have my experience, 27 years of living outdoors, 2500 nights in a tent and lots of time in extreme temperatures, don´t mess with the cold. Prepare, acclimatize properly, eat like hell beforehand and during the trip, fats, and enjoy it. It took me ten days to withstand the cold to fully enjoy this extraordinary journey. I could only put all my concentration into withstanding the cold!

However, having said all this, it is a very beautiful time of one´s life, a winter landscape in extremely low temperatures! 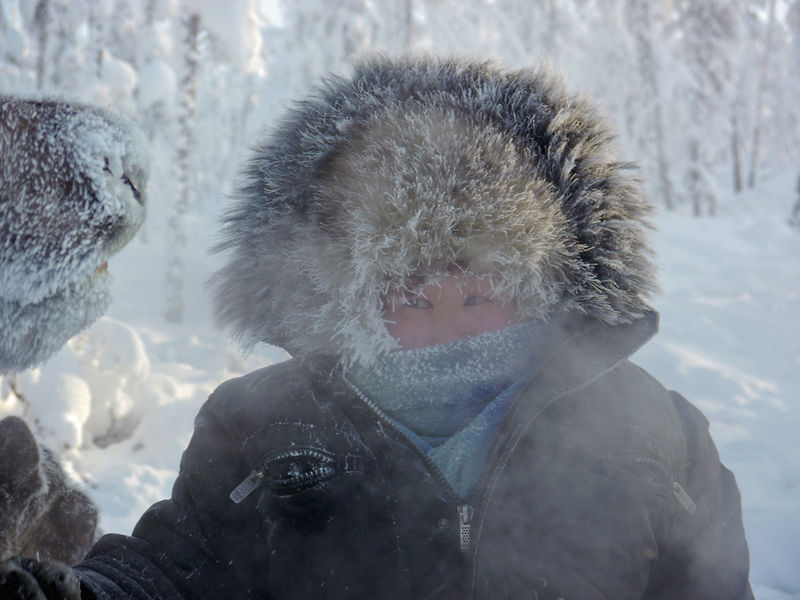 Thoughts about the Greenland Rescue and the Tire Hauling https://t.co/e40F7a76w1 pic.twitter.com/ZaoW52O3Sy