“Yesterday I went to the Sakha Theatre to see The Dream of the Shaman By Alexei Kulakovsky” I told one of the best known shamans in the Republic of Sakha, Afanasiy Semenovich Fedorov, whilst Yura, Nadia and I were filming him at his little office; “And during endless speeches before the start of the theatre, a guy who I never knew who, showed us all a big certificate saying that the diamond dealers Alrosa have named one of their biggest diamonds after him. Do you think he would have liked that if he had been alive today?”

Not very surprisingly he shook his head.

“Alexei Kulakovsky is the compass for us Sakha”, Afanasiy said slowly and with a low voice; “He was a very simple man, poor, who travelled by foot throughout our republic to see how people lived. And he died in Moscow, poor and in ill health. For him, he would see them as destroyers of the nature where all big spirits abide. This is against everything many of us Sakha believe in.” 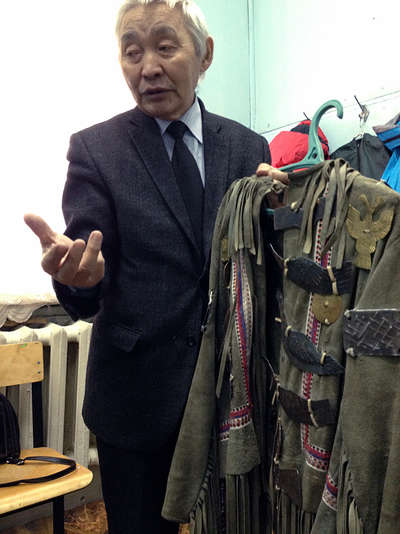 Once you get to know the Sakha a bit, you realize many of them, especially the elderly, detest the name Yakut. A name given by the Russian colonialists as they see it. They want to be called Sakha. And since they have started to revive their traditions and beliefs that for 50 years were forbidden by the Soviets, they are, of course, in my mind slightly nationalistic today. Most in a good way, some in a less good way. I am personally not very fond of any nationalistic tendencies. But Afanasiy impressed me. Even though the Sakha don’t see themselves as an indigenous Siberian people, which they aren’t, they do revere the nature as any other Siberian group of people; with a mixture of fear and love. They love and understand it, but worry about the spirits. Few know them better than Afanasiy.

“You see, when using the drum, it is divided in three parts as the world looks like. The under and upper world and the middle one we are in right now. And depending who you communicate with, with the help of your body and how you play the drum, that is how you communicate”, he said whilst he showed me how to use it after he had dressed me in a quite proper shamans outfit. 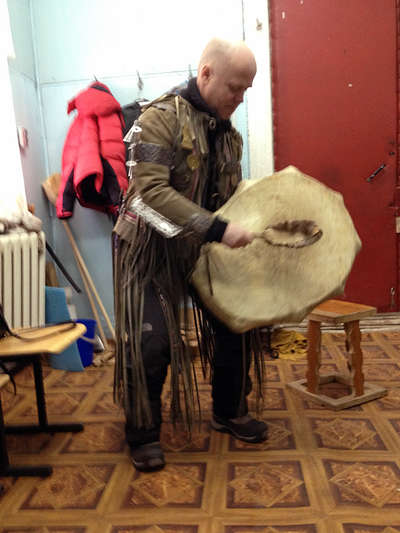 A real shamans outfit weights about 48 kgs, because it is full of heavy metal plates, which are there to confuse and stop the evil spirits which abide out there. Some have the shape of female breasts, since the spirits fear women, others are just a solid piece of metal, just to stop them harshly when trying to take over your being. For me, who has heard many stories about the shaman drum and its potency, I felt slightly uncomfortable, because this was a holy drum done in the right way more than 20 years ago. I drummed hesitantly, but its sound is comforting and exciting. On the wall, Afanasiy had taped up photos of shamans he had acquired during the years, because he is also a great preserver of the Sakha culture and traditions, especially the shamanic part. One of the shamans differed from the rest. He who looked dangerously crazy.

“He was a very powerful shaman”, Afanasiy told us; “He could cut his head off and put it back on again. That scared people.”

I noticed he died 1935 during the Stalin purges, when the Soviets were imprisoning or killing all shamans. Everyone except a female shaman on the wall, had been imprisoned. So I asked Afanasiy if this particular shaman had been killed by the Soviets.

“No”, he answered silently and continued; “He killed himself. Cut his head off.” 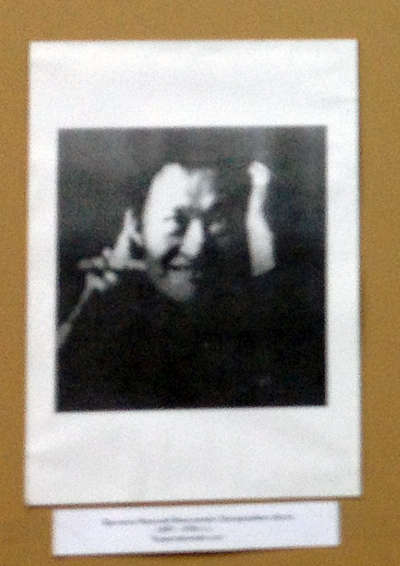 Afanasiy is not a very loud person or someone who needs attention to his own being. And this is, I think, a very much Sakha thing of how to behave. Anafasiy avoids all modern music, anything loud that he can, because it was against the proper behaviors of the Sakha. But he understood life was changing and it was hard to stop. The theatre play we watched was a modern version of Kulakovskys poem, which basically is full of worries that the Sakha will be overtaken by an external force like the Chinese, Japanese or Americans. Kulakovsky was for integrating with the Russians, well rock music and loud sounds dominated todays version. I liked it. So did my wife and the kids. And I think it mirrored todays Sakha which is quickly moving into the consumer society, but tries to hang on to some of its very sound and healthy traditions which deals with nature. And for me personally, the Sakha are a really generous and in a lot of people, where I have met some of the most ambitious people I have ever come across, one of them traveling with me on the big journey, and some of the most low key and kind I have ever met.

I am writing this at 4 o´clock in the morning in Moscow, writing in the dark. The kids are tired and we are heading home. I will read Kulakovsky a.s.a.p!

Thoughts about the Greenland Rescue and the Tire Hauling https://t.co/e40F7a76w1 pic.twitter.com/ZaoW52O3Sy