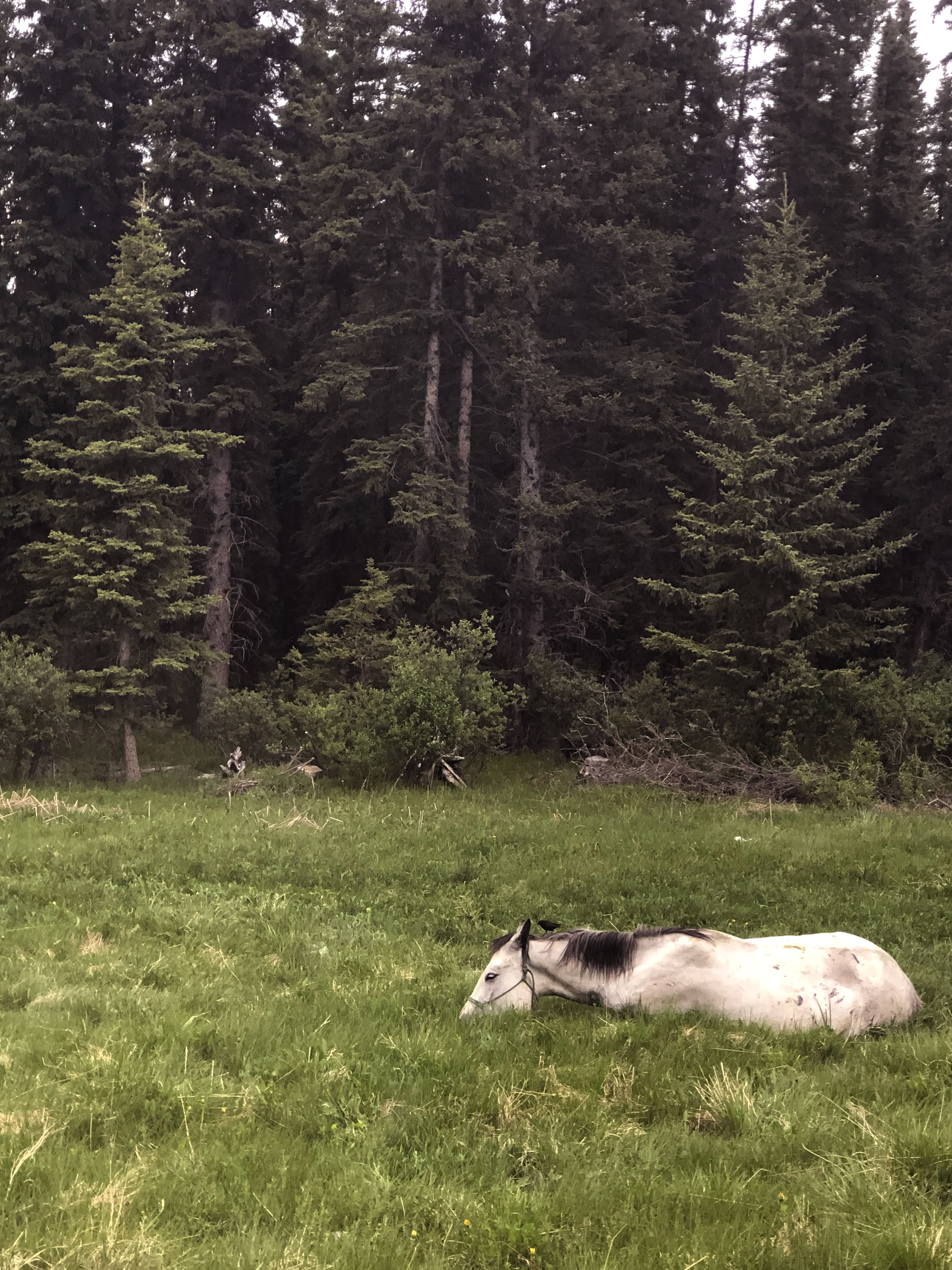 From Chungo Creek Outfitters we began our final 330-kilometer trek to Calgary.

It felt extraordinary to be so close to the finish line, especially since everyone was so healthy and well. Clara and I managed to stay safe from the Covid-19 Pandemic and Mac and Smokey were fat, exuding energy. More importantly, their feet and backs – two of the hardest things to keep healthy on a long ride – were perfect!

I was so happy.

We followed the Forestry Trunk Road across Highway 11 and before the day was over, I rode by a sign that gave me the chills.

“Calgary 306 kilometers,” read the green sign on the right side of the picturesque gravel road.

I wanted to scream with happiness! I had dreamt of seeing a sign with the word Calgary on it for years now. And here we were, right in front of it. We were closer than ever to reaching our goal.

It was the highest moment of this last long ride thus far.

But, like many times before on these journeys, what happened next took me from the heavens straight to the depths of hell in minutes.

Shortly after taking photos in front of the sign, we found a nice place to camp for the night. After untacking the boys and feeding them some grain, I put on their hobbles and let them graze on the tall, bright green grass.

Clara and I munched on our own dinner while I watched the boys hop from here to there while contentedly grazing. Little black birds sat on their backs happily going for a ride. All of a sudden, I saw Smokey lay down hard on the ground and stick his head straight forward on the grass with both ears flat back.

“Oh no, this is bad,” is all I managed to get out to Clara before I ran to him and got him up.

“What do we do,” Clara asked with water filling her eyes.

We did the only thing we could. We did not allow him to lay down again or roll and we walked him around for two hours. I also dumped a large amount of cooking oil down his throat in the hopes it would lubricate his long intestine and hopefully cause him to defecate.

As we walked the mighty grey horse around the open field, I tried to push the negative thoughts that plagued my mind. “You are going to lose him… It’s always at the end that tragedy strikes… Smokey is going to die…”

The worst part is that I didn’t have any medication on me. Since Canada recently instituted a law where only a certified Veterinarian can administer drugs to treat an animal, none could sell me anything to take on the journey in case of an emergency — like this one. I tried to purchase at least Benamine, a muscle relaxant, from several Canadian vets but I had no luck.

With no other options, we kept walking Smokey and I contacted the closest vet at a clinic in Rocky Mountain House, some 90 kilometers away. If Smokey kept getting worse, the vet said he would come see him, but at a cost of $500 CND – and that was just to drive out. Medication and treatment would be extra.

While we walked the wild horse around, he would tighten up with abdominal pains every few minutes. It was painful watching Smokey.

Clara drove back to Chungo Creek Outfitters where Corey lent us some Phenylbutazone (Bute), a white powder that acts as an analgesic (pain reliever) and anti-inflammatory medication for horses. It wasn’t Benamine but at least it would give him some relief from the pain and it was all Corey had.

Finally, after several tense hours, Smokey first defecated and a couple of minutes later, coughed out this thick green slime. Then he snorted some more of the liquid out of his nose and fell asleep standing up. That’s when I started breathing a little easier.

“That’s it buddy, relax,” I said to my mighty pony.

Then, after a five-minute snooze, he awoke, put his head down and started grazing.

“Yesssssssssss,” I yelled out loud in happiness! We had done it. Smokey was going to be okay.