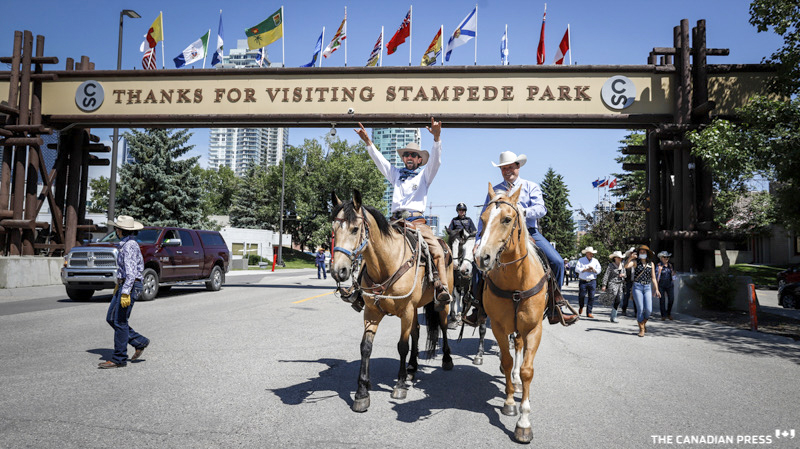 The air was still crisp as the sun came up.

With violet low-hanging stratus clouds over the Rockies to my right and a fire-lit sky to my left, I began the final 27 kilometers of my journey across the Americas to Stampede Park in Calgary.

After trekking more than 25,000 kilometers through 12 nations over the past eight years, this was my last day in the saddle. It wasn’t often that I wore a brand new 100x Smithbilt hat (a present from the Stampede) and donned a freshly pressed shirt for a day of riding, but on that beautiful Friday July 3rd, my long ride from Alaska to Calgary was coming to an end. I was to be my last long ride and I wanted to look my best.

Astride Mac, with my beautiful Argentinian girlfriend Clara Davel beside me on Smokey, and the president of the Calgary Stampede, Dana Peers, riding a flashy palomino named Oz, we rode in silence. From the saddle I could see my El Dorado far off in the distance, downtown Calgary lit orange and gold by the rising sun.

I was nervous as hell and my horse could sense it. Mac pranced as we trekked south, the stunning Buckskin sensed how tense I was, my heart trying to beat its way out of my chest. Smokey decided to ignore me and carried Clara with grace. Those two love each other.

Following Highway 1A south, two shadows appeared in the horizon. When we got closer I realized the tall silhouettes were mounted police officers atop dark, glossy, and very wide, horses. I was quickly transported to all those times that strangers rode out to greet me, to accompany me, and keep me safe. Hearty ranchers, farmers, shopkeepers, civil servants, poor sharecroppers, criminals, lawmakers, millionaires and nil-ionaires, people from all across humankind ready to help me fulfill my dream.

“Good morning, we will be accompanying you today as you ride into downtown Calgary,” said one of the officers, a tall man in his early 40s. He almost tipped his helmet. I grinned my thanks.

We made a right turn onto 12 Mile Coulee Rd, and I nearly froze. On both sides of the road sat long lines of vehicles while about 50 volunteers, police officers and media personnel awaited our arrival.

“Filipe, CTV, CBC and Global Television are going to do live hits from here,” an excited volunteer told me as I stepped down from the saddle. It was a stark contrast to the past few weeks on the road. Due to the COVID-19 pandemic, we avoided civilization and followed the gravel Forestry Trunk Road from Hinton to Cochrane. In the middle of the Rockies and its foothills, we were surrounded by the wild. It was hard to imagine that only eight days ago I was followed by a male grizzly near Corkscrew Mountain and now I was being ambushed by the media here. Both scary experiences that left my knees shaking in the saddle and my mouth dry.

After speaking to the media and thanking all of the Calgary Stampede volunteers who, even during this pandemic, continue to selflessly show the strength of their community spirit, we began crossing the cosmopolitan city.

“Make sure you take in every second,” smiled Peers while we rode through sleepy subdivisions. By 9:00 a.m., even though we weren’t allowed to release our route in advance due to the pandemic, the streets were lined with Calgarians of all ages. Some were dressed in their western gear, bright smiles stamped on some faces while others, hidden by masks, were content to observe from a socially-correct distance.

“Welcome home Filipe,” I heard over and over again as I tried to contain the tempest brewing inside of me.

The sky was now bright blue and cloudless. The Bow River ran to our left beside tall buildings that seemed to reach deep into the sky. As we rode I leaned down to pat Mac’s neck to thank him, but it was at that moment that the tears started to flow. I cried so hard I began to hiccup. I couldn’t control it or stop it. It was like everything I had felt and experienced these past eight years just came pouring out of my soul at that moment.

On these journeys I had a thousand homes and as I rode through Calgary memories of all of them came flooding back. I was overwhelmed with images of the kind-hearted people who hosted me with meals both lavish and humble… of the stunning places I saw… and the majestic horses that I rode. This final journey took me through the truly breathtaking landscape of eastern Alaska and western Canada. I spent time with the Osoyoos Indian Band and learned how to train wild horses from Master Horseman Aaron Stelkia. I rode next to Yukon’s Kluane Lake, soaked in British Columbia’s Laird Hot Springs, struggled through a terrible snowstorm in the Rockies in the middle of summer. The clank of horseshoes, the creak of my saddle, the rustle of leaves will always be the soundtrack to my life.

The wildlife I was allowed to observe on this journey was nothing short of amazing. I saw beavers, wolves, a giant moose cow nurse her calf. In fact, I explored some of the seemingly endless uses of moose. I ate moose lasagna in Teslin, Yukon and I attended the Adaka Cultural Festival in Whitehorse and saw how to make a moose hide canoe. Most memorable though, will always be the bears. I crossed paths with three bears per day at times in the southern Yukon, but the worst was a big menacing Albertan grizzly. Things are bigger here – and I know he knew that I ate bear meat pasta back in Toad River, B.C.

Just after noon, I spotted Stampede Park through Mac’s ears. It was eight years ago that I departed the Greatest Outdoor Show on Earth as an unknown cowboy with an impossible dream. Before I rode out on that hot July 8th in 2012, many people called me crazy. They said I wouldn’t make it… that I would die. Now, here I was, returning as the Parade Marshal after having crossed the entirety of the Americas on horseback.

I reached for Clara’s hand and I thanked her for her commitment to this dream.

“Without you I wouldn’t be here, amor,” I said to her while she wiped tears from her beautiful face. I turned to Peers and saw that he too had teared up.

“Thank you for believing in me sir,” I said to him before we embraced. He grinned and nodded. We didn’t need any words.

When I stepped down from the saddle my high school friend Sheilagh Haney’s smile transported me home. Marie Aitken, who lent us the support vehicle for this final journey, hugged me tightly with tears running down her face. Then I hugged Dana Peer’s wife Laura. For a second, it felt like I was hugging my own mother. They were wonderful surrogates for my childhood friends and family who were not able to be here due to travel restrictions.

After a live interview with Global Calgary we made our way to the stage in the infield for the ceremony. The stands, which should have been packed with thousands of tourists from all over the world, sat empty and silent.

Peers said a few words, then I tried to speak through my heavy tears and finally, mayor Naheed Nenshi generously “White Hatted” me; Calgary’s version of giving someone the key to the city. It’s an honor I now share with the Queen of England, the Dalai Lama, Bob Dylan, Bill Clinton and many other well-known visitors to this lovely city.

Before the ceremony came to an end, they made the mistake of giving me a bottle of champagne to pop. Enthusiastically I did so, spraying everyone before taking a long sip of the bubbly drink – just like the late, great Brazilian racing legend Ayrton Senna after a particularly satisfying victory.

And then, like champagne suddenly released from its bottle after years of patiently waiting, the gratitude welled up in my heart and almost lifted me off the platform. Over the past eight years hundreds if not thousands of people helped me fulfill this dream. Without them I would never have left the spot where I now stand much less return to it after the unforgettable adventure that will forever define my life.

Finally I want to thank the Calgary Stampede and its selfless volunteers, the mounted police and motorcycle unit, the cops in patrol cars, the first responders, and the city of Calgary. Without them I wouldn’t have been able to safely reach the finish line.

After the ceremony it was time for more interviews and then to say a sad goodbye to our kids, Smokey and Mac. I’m so proud of these two majestic wild horses that I saw evolve from skittish equines into trusting animals. Their strength, resiliency and horsepower allowed me to ride the final 800 kilometers from Grande Prairie to Calgary in only a month and 10 days – a remarkable feat. They are the true heroes of this journey.

“I love you boys so much and I’ll see you soon …. now you rest,” I said before we loaded them up into the trailer.

Clara and I will miss them greatly.

Since the news came out about Dana Peers choosing me as the 2020 Parade Marshal in early June, many people have asked if I was heartbroken that the rodeo and parade were cancelled for the first time in more than 100 years – the year that I would lead it all.

Truth is, when I first heard about the cancellation in April, it did make me sad. But if there’s one thing I have learned from this journey it’s that positivity is one of the most important things in life. It was the only reason I was able to take the first step back in 2012 and definitely why I arrived alive in 2020.

When you believe in yourself, focus, work hard and stay positive – no matter what else is happening around you – your dreams can come true. If my long ride leaves you with only one thought, then let it be this: I hope you find the courage to follow your dreams and the strength to continue even if a global pandemic tries to rain on your parade.

Always remember, in life everyone carries a journey within them. Don’t forget to start yours. 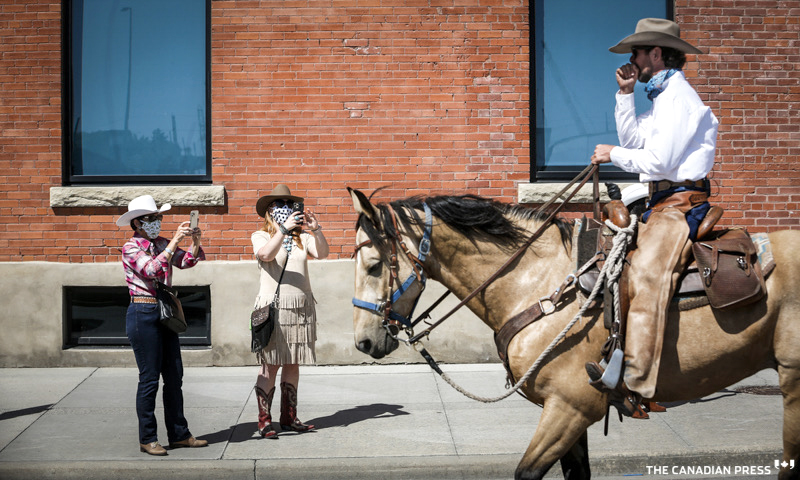 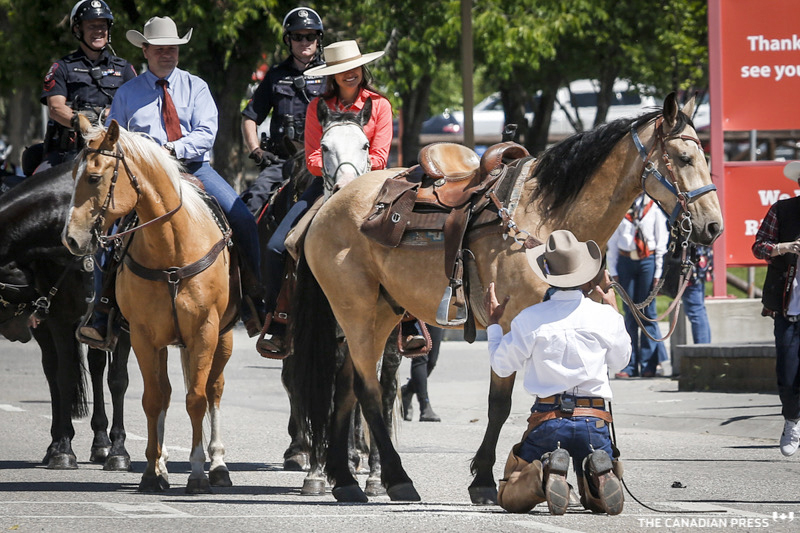